Last month was my daughter’s 4th Birthday. This year we went with a Charlie & Lola theme. The invites, decorations/tableware (most of which came from the UK or were homemade) and cake all fit with the theme – our backyard looked like a Charlie & Lola carnival! The cake was a two tiered fondant and butter cream cake with fondant toppers. I made the Charlie & Lola toppers a week before the party so they could set and harden properly. The other items that we (my daughter loved helping make her decorations) made were a cardboard bunting and a piñata. I will add the piñata pictures and instructions into my blog too. I know it’s not cake but I just couldn’t believe how cheap and easy it was to make; and you could make it fit any theme or shape you like. 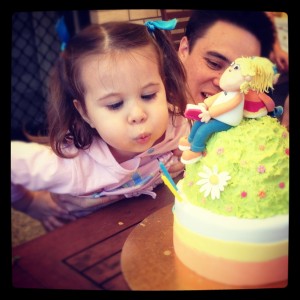 The figures were made over a number of days. Starting with the legs, feet and bodies which were left to stiffen. Then the arms/hands were made and attached and the heads were made but not attached until the bodies were stiff enough to take the weight. The hair wasn’t done until the heads were attached to the bodies. The heads were stabilised with a piece of dry spaghetti running through the body, neck and head. Charlie’s name and shoelaces are drawn on with an edible pen. 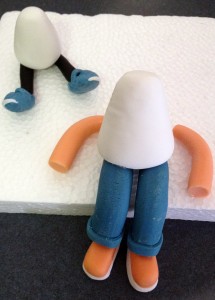 The white body for Charlie doubled as his shirt, Lola’s dress had to be draped over the body base. 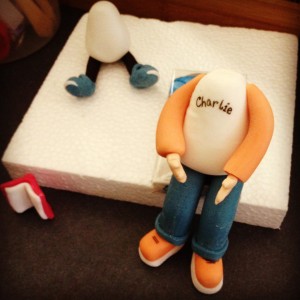 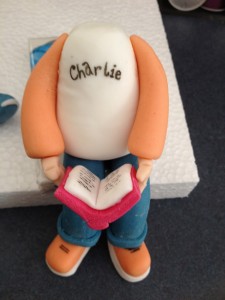 A book for Charlie to read to Lola 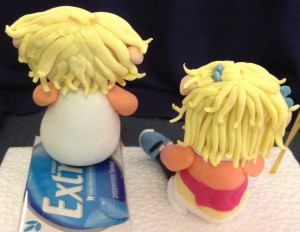 Each strand added individually. Lola has her trademark blue butterfly clips too. 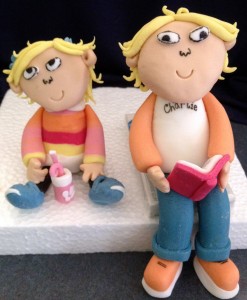 Completed toppers with cup/straw and book.

The cake was a Golden Butter Cake with butter cream frosting (Americolour Electric Green) and the bottom tier was a Chocolate Cake, dark chocolate ganaché and fondant. I don’t usually like to use dark chocolate ganaché under white fondant – white chocolate is better as it doesn’t show chocolate finger prints or stain if the fondant tears, but I didn’t have any problems with this one. 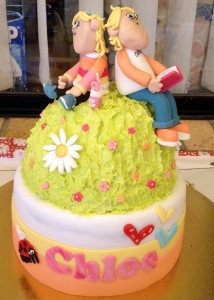 I had planned on piping the butter cream frosting using a grass tip, but I was worried about time in the end (I did this tier the morning of the party). After crumb coating the initial cake, I applied another coat of frosting with a spatula and added some texture by blotting at it with the back of the spatula. Once I had the grass on the hill, I added some flowers and painted gold dust into the centre of the large white flowers. Charlie & Lola sat on the hill with their book and pink milk.

The Decorations and Piñata…

I used a nappy box, but you could do it with a cereal box or any other stiff cardboard. I originally got the idea of making my own – I knew I wouldn’t be able to buy a Charlie & Lola one, and Googled for ideas. This blog Oh Happy Day  helped me along. There are some other great party/decorating ideas on there too. 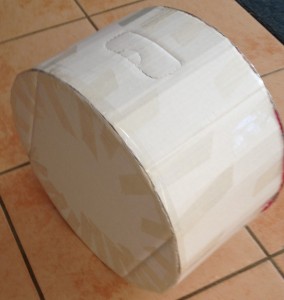 Nappy box and sticky tape. Items from in the house. No cost so far! 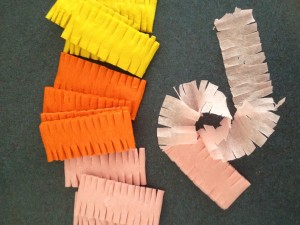 Coloured crepe paper…the only items that I had to purchse. Less than $5 in total and there was enough left to wrap the Pass-the-Parcel. 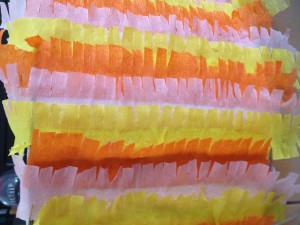 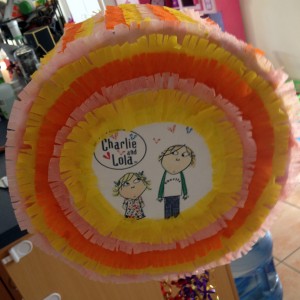 Complete Charlie and Lol Pinata – different picture on the opposite side. I even used the handle of the nappy box to double as a trap-door to get the goodies in and out!

Now that’s both girls’ birthday parties done … for this year. Nothing else to theme til next year. Hopefully, between the Hoot and Hootabelle party and this one there are a few ideas to help you theme a child’s party now, not just create their cake.