Yet another birthday cake for my daughter. This was for her third birthday. We had a Nemo Party, and it was my first attempt at sculpting a cake into a 3D shape… Nemo, of course. 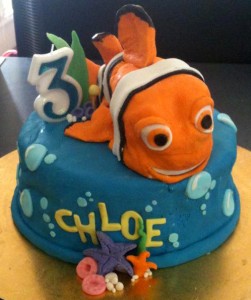 I baked the cakes as I usually do (Nemo was a plain slab), days before. I cut the shapes and layers I needed for the Nemo tier using a cardboard template that I made using a cereal box (it looked like the body of an aeroplane),  stuck them together with ganaché and put it in the freezer. Having a solid cake meant that I could finish shaping it and perfect it with a knife the next day… much easier when its frozen. I then completed it with ganaché and fondant as I would any other cake.

I think that it would’ve been easier to do the cakes and make Nemo out of fondant as a topper, but this was a little more special. It also meant that he was more of a feature as he was obviously bigger than if he was just a fondant topper.