Where have the last two years gone?!…I know it’s said a lot but really, my youngest was two last week and it was a little hard to believe. There are quite a few characters she likes at the moment but she is obsessed with Elmo and Abby Cadabby so we went with a Sesame Street theme for her party. As usual I got a little carried away with the theme and have plenty to show you (not just a cake or fondant figures) in this month’s blog…enjoy and feel free to use any of these ideas for whatever theme you are having for your party.

Like any party it started with a themed invitation that included current a photo of my daughter. I choose to email my invites these days as most people have smart phones, which means that they have access to party and address information at any time. I made my invites on Photoshop, but there are plenty of sites now that have free or reasonably priced invites that you can download or have printed. Like anything, it just comes down to your time and budget. Check out www.etsy.com for some lovely digital and handmade invitations – even if it’s only for ideas to DIY. 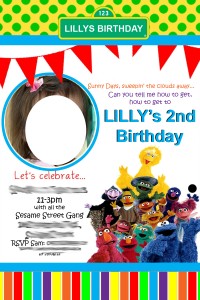 Obviously I have edited this for the blog, but this is the invite made using Photoshop.

My eldest daughter is a very girlie-girl and loves tutus and skirts. With the Sesame Street theme being such a fun one and wanting to include both the girls in the party, we purchased some tulle and made ‘no-sew tutus’ to go over the girls leggings for the party too. I printed faces on calico using  a photocopier and hand coloured them with textas before hand sewing them on. They really only need to last the day of the party. To finish them off I sprayed them with glitter hairspray for an added sparkle. 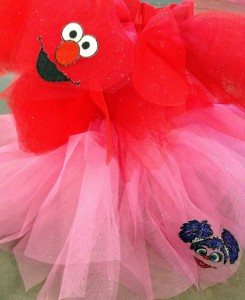 The no-sew tutus in Elmo and Abby Cadabby for the girls to wear at the party.

I used a number of things for decorations. Luckily at the time Aldi had large A2 sized posters for sale – there were six available but I only bought two. They were big, bright and colourful…and in the Sesame Street theme. The computer came in pretty handy for the rest. I used Photoshop a lot and made buntings, table scatters, water bottle labels, tags to hang from the balloons, signs and games. 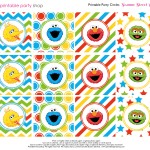 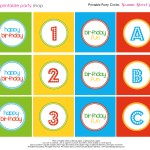 These decorations were originally from partyprintables.com but were edited in Photoshop. 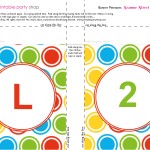 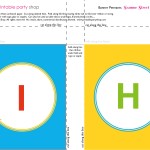 These made up the bunting. 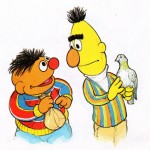 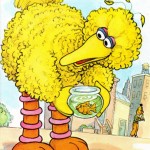 I used scanned and found images from old books too. 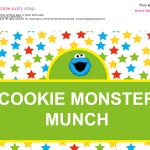 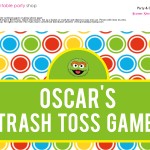 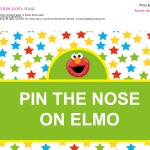 The signage for games was also the same print as the other decorations from party printables. 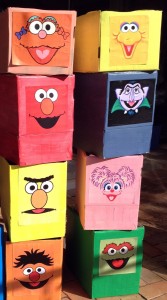 I made games that the children could play as much as they liked without me having to organise them. These were done as Street Racers. 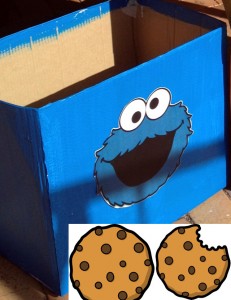 Cookie Monster’s munch was as simple as throwing cardboard cookies into his mouth from a marked distance.

There were so many food ideas that I actually ran out of time to do them all (told you I got a little carried away lol!). I can tell you what they were and show you the ones I did or managed to photograph. I bought Oreos to dip into cake pop candy. I thought it would be a quick way to do Elmo pops rather than making cake-pops but this was one thing I didn’t get round to. Simply insert stick into Oreo centre and dip in coloured candy melts and attach features of the face according to character. Do them a few days before and seal them with ribbon and bags to keep them fresh.

Cookie monster cupcakes were another item that I just didn’t manage to get around to. I have made them many times before so this picture is from a Cookie Monster party I made them for. 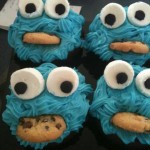 This would work for any Sesame character really.

Oscar’s Trash Can Cups proved to be a little tricky because I couldn’t make them too far ahead of time. Fill silver/grey coloured plastic cups with chocolate mousse. To top them off and make them look more ‘trash’ like crumble chocolate cookies and/or choc-chips and add a lolly sour worm for Smiley. You could even trim it with a paper Oscar on a toothpick or his ‘Scram’ sign on the front.

While this wasn’t all that I served (it was quite a big lunch with antipasto platters, wraps and chicken wings) it was all that I managed as far as the theme was concerned. 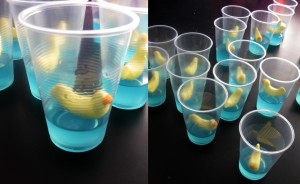 These are the lemonade jelly ‘Rubber Ducky Cups’. The Ducky’s were made from lolly bananas and orange fondant.

We are still living with the majority of our belongings in a storage shed at the moment – (loving it I tell you…not!) and I didn’t have access to various sized cake tins or most of my tools. It just shows you that you can do it without them really; I used a rolling pin, steak knife and small paint brush.

The cake itself was a French Vanilla Fudge Cake that I tried to turn into a confetti cake by adding sprinkles. I assumed that if I added the sprinkles while beating the mixture then they would just break up and blend into the mix, so I folded them through after the batter was completely finished. They must have been too small because I still couldn’t really see them after it was baked – there was a hint of colour but not the sprinkle effect I wanted. I’ll have to try again.

I knew all along that Elmo and Abby Cadabby would be sitting on top so I made them a week before the party.

The stripes and characters were going to be pretty bright so I wanted to keep the base colour plain and able to show off the other colours without being dull and boring or being a horrible contrast – white worked pretty well. I did the characters, stripes and Sesame Street sign the night before the party and wish that I had done it the day before because I didn’t quite get it to where I wanted; it still looked pretty good though. 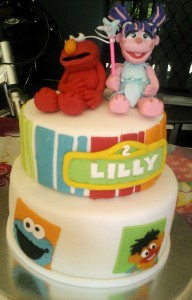 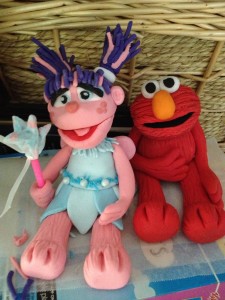 While I originally wanted coloured stripes or printed characters on the loot bags to fit with the decorations and invites, I went with what I could find and made my own (red paper bags with Elmo features printed out and glued on) – and ended up loving them ssooooo much more. 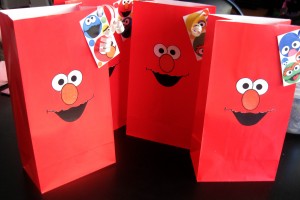 I bought a Sesame Street favour pack from a party supplies store that gave me a few toys to add to each bag. The pack said 48 items for 8 favours, but I used the pack for 12 kids and had some left over; they don’t need one of everything (and by making each bag have different favours it’s more exciting for siblings). I added some other bits and pieces like neon glow-sick bracelets, lollies and chocolates. Pixi books make tiny books for kids to collect and they are only $1 – I found some Sesame Street ones and added a book to each bag too. I themed some Smiley Sour Worms and Cookie Monster Choc-chip Cookies and popped an envelope of Sesame Street activity pages for the kids to do in as well. I made them and printed two sheet per A4 page so they were small enough to fit in – the usual activities ‘Spot the Difference’, Mazes, Dot-to-dot etc. 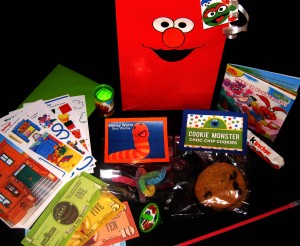 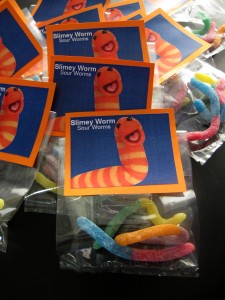 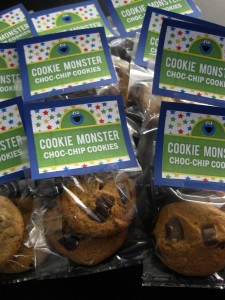 Themed food items were added too. 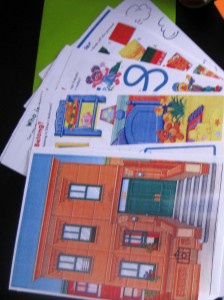 Activity sheets were from a Sesame Street activity and colouring book.

To finish of my Elmo Loot Bags I stuck a Sesame style thank you on the back of the bag. 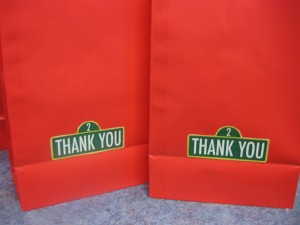 I had so much fun doing this (thank-gawd I was on school holidays though); it’s pretty easy to see how I ran out of time…and got carried away with the fun theme. All tags, table scatters, invites, decorations, loot bags, cake, toppers – everything was made at home. 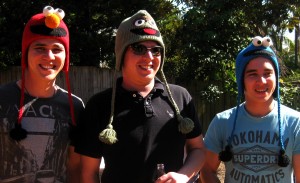 Surprisingly, the boys even attempted a ‘dress to theme’ lol…