OMG! Child number two has just turned three – officially not a baby anymore, but rather a ‘big girl’ I’m told. This, like every other party, was not going to be a big event – yes, I can hear the laughing already.  As usual I was carried away with the theme and managed to create more Peppa Pig themed food than first planned. Cookies, cupcakes and obviously the birthday cake all managed to be shaped, topped or decorated in Peppa characters.  The usual printing of decorations occurred, games were themed too and the loot bags contained just as much themed stuff… pens, activities, chocolates…the kids had a great day and to be honest, that’s what it’s all for. 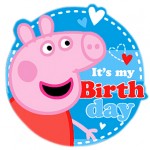 As I have made so many cakes – not just for kid’s birthdays but the adults too, I am quite over fondant at the moment. I wanted to decorate the cake with fondant 2D characters, but didn’t want a complete fondant layer covering the whole cake (I also wanted to play with this for some ‘Frozen’ themed cupcakes for next month!).  I have been colouring my own chocolate for cake pops for a while now, without having to use the chocolate colours/gels. It’s as simple as adding the colour to some oil and mixing the coloured oil into the chocolate and it doesn’t seize. The same idea should work then with ganache – right? This is the theory I went with and I coloured my cream as it was the ‘fatty’ part of my ganache mixture. It worked really well. The Wilton coloured gel gave me the blue I was looking for and I didn’t need to buy specialty gels that I would otherwise not use. The other idea I guess you could go with – maybe for stronger colours like red – would be to use the cake pop candy melts that are already coloured to make your ganache. If you do, let me know how it goes. This is my ‘blue cream’ going in to melt with the white chocolate to create my ganache… 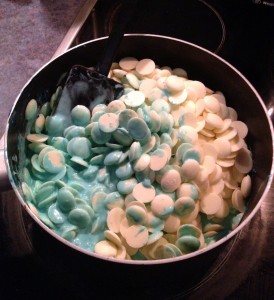 Using white chocolate and adding the colour to the cream, I was able to create a coloured chocolate ganache that took the place of a full fondant layer. I even used the coloured ganache to fill the layers of the cake so it was all the same between each layer when the cake was cut. 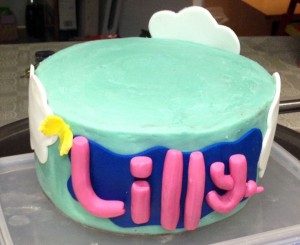 This is the top tier of the cake. As you can see a nice smooth ganache covering with a few fondant details to help with the theme.

The full cake…from many angles: 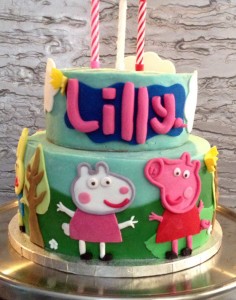 Lilly’s name was made to be similar to the Peppa Pig logo. 3D butterflies were also added in places to add some dimension. 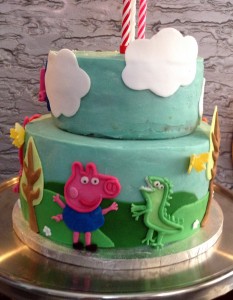 I couldn’t have a Peppa Pig cake without George or Mr Dine-saw…Grrr! 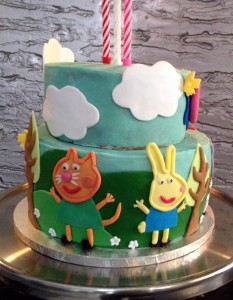 Candy Cat and Rebecca Rabbit complete the friends at play…

So this is the themed food from the rest of the party, and if you think that’s a lot of Peppa Pig you should have seen the present table – seriously, I have never seen so much Peppa stuff in the one spot; we could open a store. 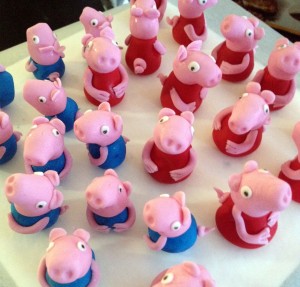 Peppa and George toppers for the ‘Muddy Puddle’ cupcakes. 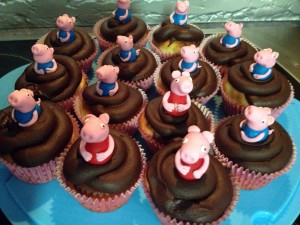 Peppa and George in their Muddy Puddles… 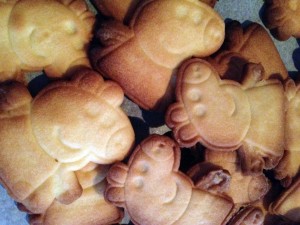 And for those of you who may be doing a similar party, the games we played are listed below: 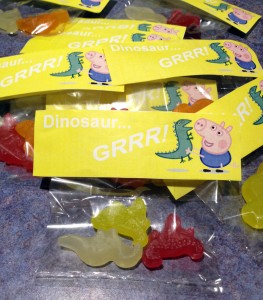 Dinosaur lollies for the loot bags 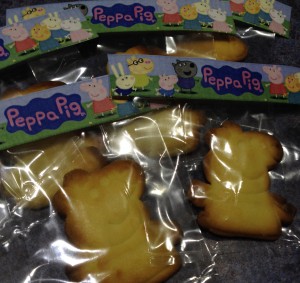 Now that’s over, time to start thinking about the next one (August!)…happy baking Sx